These are just some books in my stacks that I plan to read in November.  I wanted to share some quick notes on them. 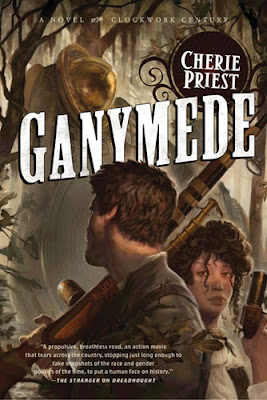 Book #4 in the Clockwork Century Series by Cherie Priest
this is not-to-be-missed if you're a steampunk aficionado!
Cherie Priest has put her stamp on what it means to be a woman writer of the steampunk genre.
Others of the books in this Clockwork Century Series are:
"The Boneshaker,"  "Clementine," and "Dreadnought" respectively.
Read more about this book here:
"The air pirate Andan Cly is going straight. Well, straighter. Although he’s happy to run alcohol guns wherever the money’s good, he doesn’t think the world needs more sap, or its increasingly ugly side-effects. But becoming legit is easier said than done, and Cly’s first legal gig—a supply run for the Seattle Underground—will be paid for by sap money.
New Orleans is not Cly’s first pick for a shopping run. He loved the Big Easy once, back when he also loved a beautiful mixed-race prostitute named Josephine Early—but that was a decade ago, and he hasn’t looked back since. Jo’s still thinking about him, though, or so he learns when he gets a telegram about a peculiar piloting job. It’s a chance to complete two lucrative jobs at once, one he can’t refuse. He sends his old paramour a note and heads for New Orleans, with no idea of what he’s in for—or what she wants him to fly.
But he won’t be flying. Not exactly. Hidden at the bottom of Lake Pontchartrain lurks an astonishing war machine, an immense submersible called the Ganymede. This prototype could end the war, if only anyone had the faintest idea of how to operate it…. If only they could sneak it past the Southern forces at the mouth of the Mississippi River… If only it hadn’t killedot inside it. But it’s those “if onlys” that will decide whether Cly and his crew will end up in the history books, or at the bottom of the ocean." 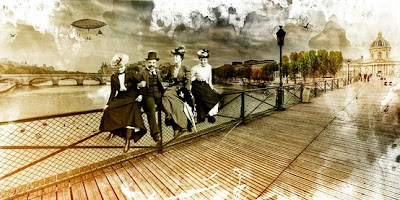 Just a picture of me and my grandmother Charlotte Flowers Triplett last week in London after the World's Fair honoring Queen Victoria.  I'm the girl on the left-hand side.  Grannie's on the far right.  What fun we had!!  We tripped the boardwalk home afterwards. 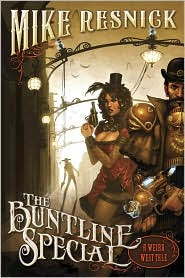 Wild, wild West, anyone?  It's a strange treat to meet all the "boys" of the OK Corral in steampunk!  What was once a veritable freebie has now fled up the charts in sales and 5 stars category.
Here's a quick summary:
"The year is 1881. The United States of America ends at the Mississippi River. Beyond lies the Indian nations, where the magic of powerful Medicine Men has halted the advance of the Americans east of the river. An American government desperate to expand its territory sends Thomas Alva Edison out West to the town of Tombstone, Arizona, on a mission to discover a scientific means of counteracting magic. Hired to protect this great genius, Wyatt Earp and his brothers. But there are plenty who would like to see the Earps and Edison dead. Riding to their aid are old friends Doc Holliday and Bat Masterson. Against them stand the Apache wizard Geronimo and the Clanton gang. Battle lines are drawn, and the Clanton gang, which has its own reasons for wanting Edison dead, sends for Johnny Ringo, the one man who might be Doc Holliday's equal in a gunfight. But what shows up instead is The Thing That Was Once Johnny Ringo, returned from the dead and come to Tombstone looking for a fight. Welcome to a West like you've never seen before, where "Bat Masterson" hails from the ranks of the undead, where electric lights shine down on the streets of Tombstone, while horseless stagecoaches carry passengers to and fro, and where death is no obstacle to The Thing That Was Once Johnny Ringo. Think you know the story of the O.K. Corral? Think again, as five-time Hugo winner Mike Resnick takes on his first steampunk western tale, and the West will never be the same."
Hope you have great reading plans for November, too.  Leave me a comment and let me know!
Deborah/TheBookishDame
﻿*Note:  All summary quotes are taken from Barnes & Noble
Posted by Deb at 4:13 AM 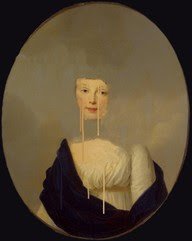 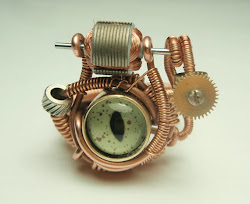 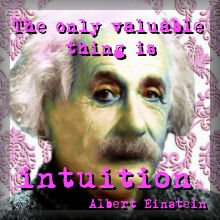 Deb
Armed with a library card and the new skill of reading, I became a lover of books before I could discover boys! I've never looked back. Today, I'm a PR & marketing professional for authors and their books with a virtual book touring company. I'm known as The Bookish Dame.

The Bookish Dame's Other Blogs